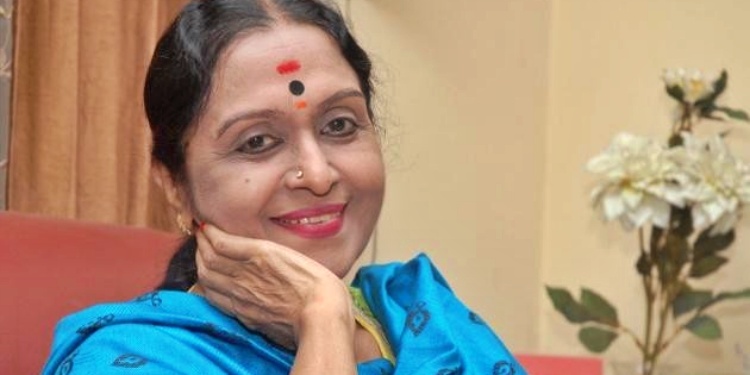 She was born on 7-1-1938. She was from Bangalore. Her birth name was Radhadevi. Bhairappa is her father and Rudramma is her mother. Her father was a police officer and her mother was a housewife. She was the fourth daughter of them. Her father wants her to learn dancing. She was encouraged by her father to choose acting as her career. When she was young her father used to accompany her to the studio’s. He used to massage her feet when they are swollen and he used to tie salangais on her. Her mother was very strict about her dress code. She was recognised by B.R. Krishnamurthy, by seeing her singing in a function. He offered a chance, but she refused the offer.

B.Saroja Devi was married to Shriharsha. Her marriage was arranged by her parents. Her husband was an engineer from Bharat electronics. He was also from gowda caste. She was facing some financial and income tax problems. Shriharsha, helped her to solve those problems. She performed in Telugu, Tamil, Hindi and Kannada movies.’

B.Saroja Devi was one of the most famous actresses in the history of film industry in India. For over 60 years she has done around 200 movies. Abinaya Saraswathi, Sallabasundari, Abinaya Kanchana Mala, Abinaya Bharthi and Kannadathu Paimkili are some of her titles which are given by different film industries. Sugar with the famous actors like A. Nageswara Rao, Gemini Ganesan, Ramachandran, N.T. Rama Rao, Rajkumar, Sivaji Ganesan, S.S. Rajendran, Ravichandran, Srinath, Kalyan Kumar, Vishnuvardhan, Shrinath, Murali, Ambarish, Devraj, Sai Kumar.