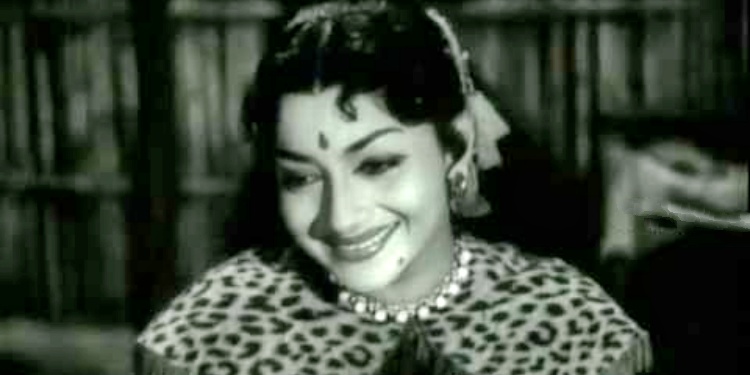 E.v Saroja is an actress in films and also a dancer. She was born on 3-11-1935. She was from Engan Village, which is in Thiruvarur district of Tamilnadu State. She was a very famous actor in her times. She was also known as Engen V. Saroja. She is the sister of E.V. Rajan. E.V.R. Pictures which  is the banner established by both of them. Under this banner they have produced few films like Thanga Surangam in this film Sivaji Ganesan was the hero and Koduthuvaithaval film in which M.G.R was the hero. T.R. Ramanna is her husband and they were blessed with a daughter. She died because of a heart attack in Chennai on 3-11-2006. She worked in Telugu and Tamil films.

E.v Saroja debut film was in Tamil industry, which was En Thangai film in 1952. She was playing in a lead role in this film as a blind girl. In this film her co-actors are M.G.R, P.S. Govindan, Madhuri Devi, P.V.N. Bharathi and V. Susheela. This film was inspired by T.S. Natarajan’s play and this film was remade in Telugu as having a title Aada Paduchu, as Onde Balliya in Kannada and as Chhoti Bahen in Hindi. This film was directed by the Ch. Narayana Murthy. Ashoka Pictures is a producer banner of this film. The film was written by K.M. Govindarajan and T.S. Natarajan. The music was given by C.N. Pandurangan. Her next film was Gulebagavali in 1955. The producer and director of this film are T.R. Ramanna. This film was written by T.N. Ramaiah Dass. In this film she was playing a lead role along with S.D. Subbulakshmi, M.G. Ramachandran, Rajasulochana, T.R. Rajakumari and G. Varalakshmi. Music was given by Ramamoorthy and Viswanathan.

She worked in some of these films Pennarasi, Amara Deepam, Bhale Ramudu, Paadavalai, Penki Pellam, Madurai Veeran and Rambaiyin Kaadhal.  In 1957, she performed in Pudhumai Pithan film. This film was directed and written by T.R. Ramanna and M.U. Karunanidhi. Producer of this film is K. Muniratnam. Along with her  M.G. Ramachandran, B.S. Saroja, T.R. Rajakumari, J.P. Chandrababu, T.S. Balaiah, E.R. Sahadevan and K.S. Angamuthu. Music was given by G. Ramanathan for this film. She has worked in about 70 films.