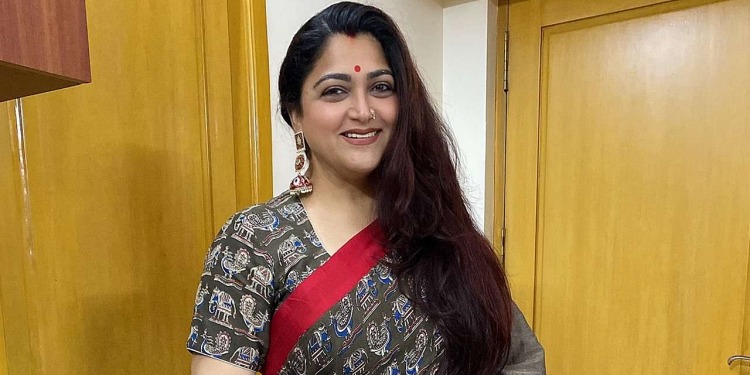 Khushbu Sundar is from Mumbai, which is in Maharashtra state. She was born in Muslim family. In 2000, She was married to Sundar C. He is a director, producer and also an actor in films. They were blessed with two daughters. Anandita and Avantika are her daughters. Avni cinemax is their own production house, which was named after their daughters. She is an actress, a politician, film producer and also a television presenter. Her birth name is Nakhat Khan. She is now living in Chennai for over 34 years. She is a very famous actress. She started her career as a child artist. Her first film as a child artist was The Burning Train in 1980 in Hindi movies.

For five years she worked as a child artist in Hindi language films like Kaalia, Laawaris, Dard ka Rishta, Naseeb and Bemisal. First dancing role in the film was Meri Jung in 1985. She performed in a super hit song ‘Bol Baby Bol’ it was very famous. In 1985, she worked in her debut film Jaanoo film. Jackie Shroff is the hero of this film. In 1986, she also worked in the Tan Badan film in the lead role.

Khushbu Sundar also worked in some supporting roles in the movies. In 1986, she worked in Kaliyuga Pandavulu film opposite to Venkatesh. In Tamil language she worked on over a hundred films. She also worked in Malayalam, Telugu and Kannada films. In Malayalam films she worked with Mohanlal Mammootty Jayaram and Dileep in very famous films. She worked with the famous actors like Kamal Haasan, Rajinikanth, Nagarjuna, Sharath Kumar, Venkatesh, Chiranjeevi, Ambareesh, Vishnuvardhan, Tiger Prabhakar, Suresh Gopi, Ravichandran, Prabhu and Sathyaraj. She is also a television artist. She worked in the Kalki serial as Kalki, which was telecasted in Jaya TV. She also worked in some famous serials. Was also a producer for television serials like Kalki, Rudra, Namma Kudumbam, Nandini, Lakshmi stores, Maya,etc. For the show Jackpot she was very famous. She joined the political party Indian National Congress to serve the people. She was a very famous personality in the film industry.