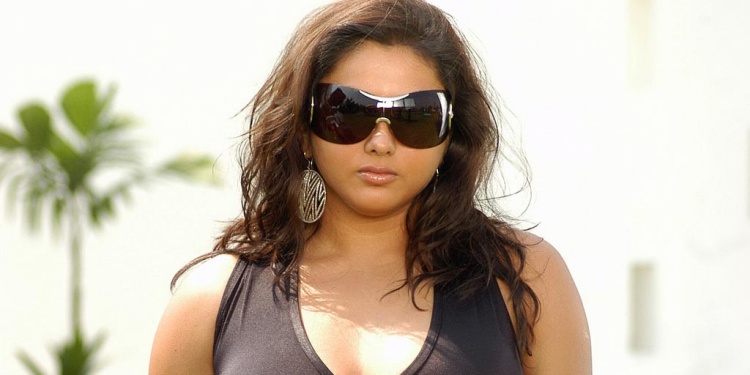 Namitha is a film actress in India. She was born on 10-05-1981. She is from Surat which is in Gujarat. She has completed B.A in English Literature.Her father is a businessman, his name is Mukesh Vankawala. Her mother is a housewife. She has a brother called Nevil Vankawala. Swimming, reading books and playing badminton are her hobbies. Her favourite actors are R.Sarathkumar and Vijayakanth. Jyothika, Tabu and Nandita Das are her favourite actresses. White and Black are her favourite colours. Her favourite sport is Badminton. Sidney Sheldon is her favourite writer. Enrique Iglesias is her favourite singer. On 24-11-2017 she was married to Veerendra Chowdary. Sindhuri park hotel in Tirupati was her wedding venue. She started her career in participating in beauty and Miss India pageant. In 1998 at the age of 17 she was crowned as Miss surat. After this in 2001 she was a third runner up in Miss India pageant. In that contest Celina Jaitley was the winner. She has done many TV commercial ads in her early career such as Manikchand Gutka, Arun Ice Cream, Himani Cream, Nile Herbal and Himani hand soap. She performed some films in bollywood but she could not gain success there. So, she started her literature in English.

She got an invitation to a Telugu movie audition. She was selected in the film Sontham in 2002, it was a romantic movie and directed by Sreenu Vaitla. Gemeni was her next movie with a very popular star Venkatesh which was directed by Saran and produced by M.Saravanan, M.Balasubramanian, M.S.Guhan, B.Gurunath. This movie was written by Posani Krishna Murali. In this film she played a character of a marvadi girl.

In Tamil films she became very popular in the year 2000s. She acted with many famous actors in Tamil such as Sarath Kumar, Vijayakanth, Arjun, Sathyaraj, Parthiban, Sundar.C. she also worked in comedy films.
In 2019 she joined Bharatiya Janata party along with Radha Ravi co-actor in Chennai.
In 2012 from Tokyo TV which was under a Japanese media station, selected her as a most beautiful person in India. She has also performed in TV shows like bigg Boss Tamil in season 1 and she was a judge in dance Jodi dance 3.