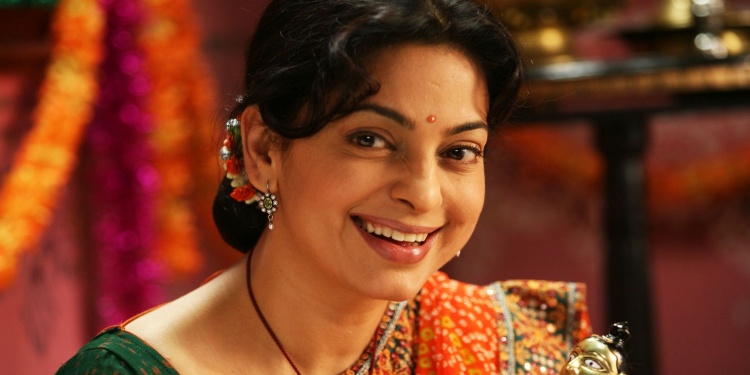 Juhi Chawla Mehta is a famous indian actres in bollywood. She was born on 13-11-1967.
She lived in Ambala city of haryana State. Her father worked as an officer in the Indian Revenue Service (ISR).
She completed her studies in Fort Convent School and her higher studies from Sydenham college which are in Mumbai now.
She was married to Jay Mehta in the year 1995. She was blessed with two children,one is Jhanvi Mehta her daughter and her son Arjun Mehta.
Juhi Chawla won miss india titl in 1984. In miss Universe contest which was held in 1984 she has also won the Best Costume award.

Chawla entered into film industry in 1986, but she faced failures in starting but later on she has sen success in her career. She also worked in kannada movies.
In 1988, Qayamat Se Qayamat Tak film she was in leading role and her co-star in male was Aamir Khan. This film was reached to everyone’s heart.
She was awrded Filmfare Best Movie award for the movie Romeo and Juliet, which was a huge success to her. Chawlawas the first actress to receive Filmfare award for lux New Face of the year. she was also nominated for Filmfare Best Actress award.

Juhi Chawla worked with Shah Rukh Khan, Raju Ban Gaya Gentleman was their first film working together with eachother, which was directed by Aziz Mirza.
It was a comedy film. She played a role of bar dancer in the action film Lootere in 1993, Aaina a romantic movie in 1993 in that film she acted as a Sacrificing women and in Hum Hain Rahi Pyar Ke film she played a role as South Indian women.

Juhi Chawla worked with many famous actors in bollywood for example with Govinda, Rajesh Khanna, David Dhawan, Rishi Kapoor, Shah Rukh Khan, Sunney Deol, Nasruddin Shah, Chunkey Pandey, Anupam Kher etc,.Darr was a film she acted under Yash Chopra’s direction. In that film Sunny Deol and Shah Rukh Khan were her co-actors in male.
For this film Darr she had a major success and gave her several awards which also included the National Film Award for best popular film providing Wholesome Entertainment.
After the film Daraar in 1996 with Arbaaz Khan and Rishi Kapoor as co-actors, she was nominated in Filmfare for her performance.
In 1997 she was acted in Yes Boss, Deewana Mastana and Ishq films. which entertained the people in that year. Among these films Ishq was the top and earned her fame and money.
She was acted as model in the film Yes Boss which earned her an Filmfare nomination for seventh time.
In 2001 she acted in Aamdani Atthani Karcha Rupaiyya opposite Govinda, as she played a critical role in the film, it was a superhit and a comedy film which was awesome movie.

She worked in another movie in that year One 2 Ka 4 with Shah Rukh Khan and Jackie Shroff for seventh time working together with both the actors.
In 2016 she worked in Chalk n Duster moive which was her independent movie, not only this film she worked in some more films as solo actress from the year 2003.
She was known for her comic timing and performances in the film Industry.